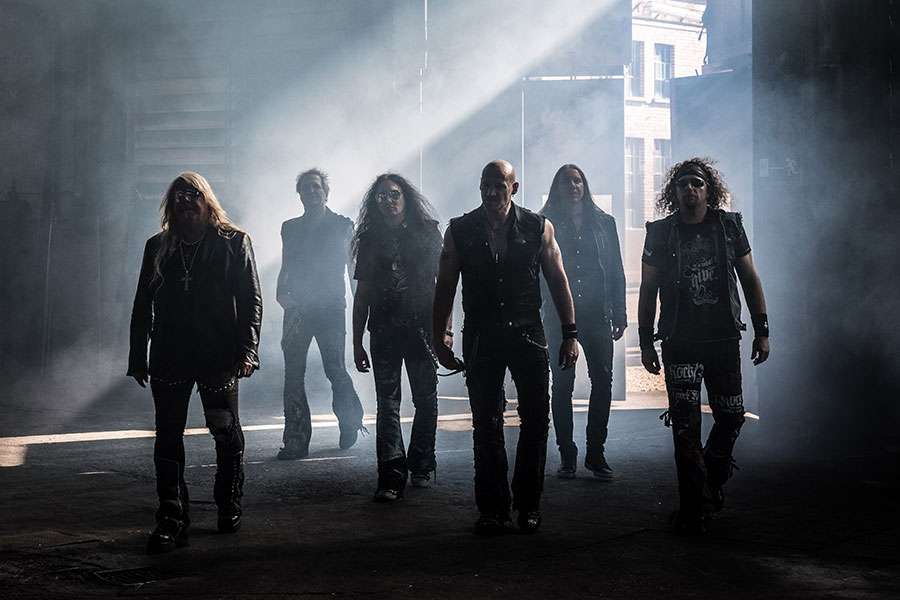 If you’re talking about today’s European top metal acts the discussion is heading straight towards Primal Fear. Former Gamma Ray vocalist Ralf Scheepers and bassist/vocalist Mat Sinner, two of the most respected German metal musicians founded the band in late 1997. They recorded their first Primal Fear songs for the Japan based record company JVC Records and signed a deal with JVC for their debut album some weeks later. Germany’s best kept secret was soon a target for most of the European record companies and the band signed to Nuclear Blast Records in early 1998 for the rest of the world. The debut album, simply called Primal Fear was released in March 1998 and entered the German Media Control album charts straight ahead on position 48, soon followed by chart success in Japan. After touring together with Running Wild and Hammerfall. The second PF album Jaws Of Death entered the German Charts on position 49 in July 1999, followed by their first headlining World Tour. incl. countries like Brazil, Japan and of course Europe. A kind of PF hysteria broke free and surprised all metalheads, who couldn’t understand, what kind of thunder was raging above them! In this fantastic mood, PF started the songwriting for Nuclear Fire. The result was their heaviest and strongest album so far. Typical PF trademarks like Ralf’s outstanding voice, twin guitar solos, killer riffs and a catchy choruses marks Nuclear Fire as a classic. Nuclear Fire has set new standards and charted in Germany Pos. 37, Italy Pos. 71, Switzerland Pos. 77 and Japan Pos. 23! The following headlining European Tour was a huge success and Primal Fear were named as one of the hottest live bands. PF played 10 countries with packed audiences and a fantastic response with co-headliners Children of Bodom. Their 4th album Black Sun released on April 29th 2002 The album was mixed this time at the Sonic Ranch in El Paso/Texas. Black Sun charted in Germany on Pos. 55. The following tour through Europe and 11 countries was a huge success, followed by a fantastic and successful tour through South America in December 2002 with the highlight show in Sao Paulo/Brazil at the Via Funchal.

In April/May 2003 the band headed to their first US & Canada tour to be a part of the Metal Gods Tour together with Halford, Testament, Immortal and others, with drummer Randy Black. The long awaited first DVD The History Of Fear was released in September 2003 including a superb digipak packaging with fantastic reviews by the metal press. During this time, the Metal Commando was actually in the recording studio and started the sessions for their new album Devils Ground. A video clip was shot in Stockholm/Sweden for the first single of the album and the all time metal hymn Metal Is Forever! After touring, the band started the songwriting for their sixth album Seven Seals and this album was a new start and a fresh breath to reload the sound of the band. The album was mixed in the legendary Warehouse Studio in Vancouver/Canada by mixer Mike Frazer. Two video clips were shot for the songs Evil Spell and Seven Seals. The band toured together with Helloween for 3 month through Europe, followed by an extensive tour in Japan. Mat Sinner’s book biography The Book Of Seven Seals was released in the middle of the tour and the great packaging was sold out in a short time.

At the peak of their career, Primal Fear ended up the long time partnership with Nuclear Blast & JVC Records and signed a worldwide multi album deal with Frontiers Records. Both Nuclear Blast and JVC released a final BEST OF album Metal Is Forever, which was a huge success in Japan and stayed for three month in the Burrn Album Charts.

The first album for Frontiers Records was released in September 2007 and named New Religion. Epica’s lead singer Simone Simons was invited to studio to sing the first duet in Primal Fear recording history, the song Everytime It Rains  and the all time favorite Fighting The Darkness. Magnus Karlsson from Sweden was introduced as the band’s new guitarist and the band embarked on their “10 Years Of Metal” 2008 anniversary tour! The next studio album named under the mysterious banner of 16.6 was released worldwide in May 2009. 16.6 charted in Germany on Pos. 46 of the album charts and the following 16.6 World Tour was a great success incl. shows in Mexico, Colombia, Argentina, Mexico, South America, USA, Canada & Europe. A video clip was released for the song Six Times Dead. Some shows in the USA and Europe were recorded and ended up in the first official LIVE album Live In The USA and the concert DVD All Over The World incl. a playtime of 3 hours and total metal mayhem, video clips and backstage scenes. A must for Primal Fear fans, followers & supporters! UNBREAKABLE was the next strike – released on 20 January 2012 incl. the video-clip / single BAD GUYS WEAR BLACK. Unbreakable charted in Germany #31, Sweden #48, Finland #50, Japan #27, Austria #74, Switzerland #51, Netherland Top 200 and in the US Billboard Heatseekers for the first time on #44. A new video clip was released for the opening track of the album STRIKE with now more than 1 million Youtube views.

After some very serious songwriting sessions and an intense pre-production sin 2014, the band started to record the new album Delivering The Black with producer Mat Sinner. The band moved to Denmark to finish the album with acclaimed producer/engineer Jacob Hansen (Volbeat, Pretty Maids, Amaranthe) handling the mix. When Death Comes Knocking and the 10 minute opus One Night In December, spiced with big orchestral arrangements and complex sound designs. DTB charted in Germany on the highest ever position #13 followed by 10 more countries and the “Eagles & Lions World Tour”.
With all the new influences Primal Fear set the level high for their next production. Already the song writing process was very promising, the band released their so far most successful album Rulebreaker. Aside of another spectacular Top 20 chart success, Rulebreaker was the first chart entry of the band ever in the US billboard charts. The band shoot video clips for the new band classic The End Is Near and Angels Of Mercy. The following world tour included 10 countries in South America, the US & Canada, Japan, Australia and 15 countries in Europe with around 120 shows and festivals, documented on the third video clip for the album Rulebreaker. Primal Fear recorded their hometown show in Stuttgart for their next live album, DVD & BluRay named Angels Of Mercy released in June 2017. Even Angels Of Mercy (Live) charted in a lot of countries and the band released in the meantime the double CD compilation Best Of Fear in November 2017 feat. four new songs incl. the new single If Looks Could Kill and one CD with all their most successful metal tracks and the second CD with all their epic tracks of the Frontiers Records time.

After a little break, the song writing for their next album was scheduled and the band recorded most of their 2018 album named Apocalypse in the studio of Jacob Hansen in Denmark with producer Mat Sinner. Packed with songs of crushing energy (New Rise, Blood, Sweat & Fear, Hail To The Fear) a superb orchestrated ballad (Supernova) and of course an over 8min epic extravaganza Eye Of The Strom – the band is ready for another trip around the world, recorded two video clips & singles for King Of Madness and The Ritual plus the power monster and first song unleasehed for the public from the album Hounds Of Justice - The Metal Commando mean business. Ralf’s trademark vocals are more present than ever, big thundering production, maximum power, raw energy and a fantastic team work set the new level for future Primal Fear productions. Are you ready?